Unofficial fork of ButtonForge addon for World of Warcraft classic. 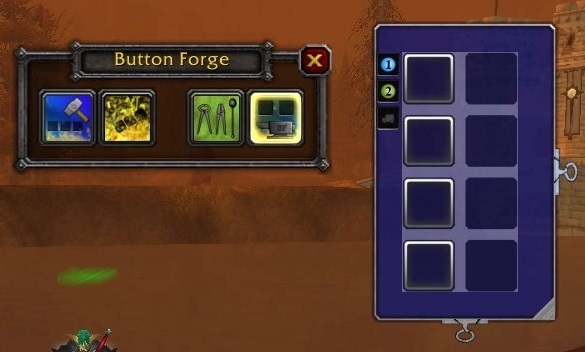 Button Forge is an Action Bar addon that allows you to create completely new Action Bars (as many as you want). Each bar can have up to 1500 buttons organised into rows and columns (up to 5000 buttons total).

Your existing UI wont be changed by Button Forge, it will continue to function and look how it currently does. The bars you create are totally independent allowing you to simply and cleanly add additional action bars to your UI.

The new buttons operate almost identically to the default action buttons (i.e. drag and drop actions as you normally would, etc); there are a few subtle differences though, such as the ability to drop non usable items into the buttons (handy for keeping count of items you're harvesting).

Creation and configuration of the bars is done via the mouse using a GUI interface. This GUI is designed to be straight forward and easy to use, although there is documentation for both basic and advanced configuration options below.

How Do I (Basics)

Configuration mode is where you will do things such as create new bars and buttons, position them, etc... There are several ways, any of the following can be used:

Add or remove rows and columns of buttons on a bar

Change the scale of a bar

Make the bar only visible for a given talent spec

Make the bar visible when in a vehicle

How Do I (Advanced)

Set key bindings for the buttons

Make a bar only visible while in combat... or out of combat, or while stealthed, cat form, etc...

To setup a visibility macro click the Eye icon and type in the conditional and then press enter (or escape to cancel)... Some basic examples are:

Make the actions on a bar change depending on combat status, or while stealthed, or cat form, etc...

This actually can't be done, but the same effect can be achieved by taking visibility macros a step further. You can place several bars into the same position on screen and setup visibility macros so that only 1 is displayed at any given time, I will describe the following example to illustrate how to do this.

Lets say you are a druid and want a bar in the center of the screen to have actions for catform and bearform in the same position, and to swap between them depending on your current form:

Create a bar and position it where you want, set it's scale and the number of buttons you want on it Optionally add a label to it to help identify it easier in the interface (lets make this one the bear bar) Drag the abilities you want on to it Set the visibility macro to [bonusbar:3] show; hide Create another bar place it in the same position as the first one... You might notice that it has docking to make this really easy Double click the scale button to default the bar to have the same scale as the first bar (double click again will revert back to the standard scale of 1) Optionally label the bar (for cat form this time) Drag the abilities you want to it Set the visibility macro to [bonusbar:1] show; hide Exit configuration mode and give it a try

If you also wanted to setup key bindings you could do this as well since you can reuse bindings. The buttons in each position on the two bars can have the same binding since only one bar will show up at a time (if at all). Also note that if you want to alternate between which bar you are working on during configuration mode you can use the Send to Front and Send to Back icons so you don't have to move bars out of the way.

Set a label for the bar and position the top left corner of the bar be the same as another bars. Each bar that has a label set will have that label organised from left to right above the bars. Clicking the respective tab (label) will bring that bar to the top.

Note: Even without a tab for the bar you can still bring it to the front or send it to the back by clicking on it's Send To Front and Senf To Back buttons respectively.

Create a bonus bar (contains the abilities when you enter a vehicle, possess another unit, or the special abilities given during specific fights)

This can be done using the Create Bonus Bar button. Note that the standard Bonus Bar will continue to function as normal so creating a Button Forge bonus bar is purely optional.

This can be done using the Right Click Self Cast button.

/bufo undoprofile (reverts to how things were before you ran loadprofile)

You may have some questions not covered above, I will try to address those here.

Why do all bars and buttons show up in configuration mode even when some are configured not to show up currently?

This is done so that you always can configure a bar even if it has a rule set to prevent it from being visible. This also means you can assign actions to bars that you otherwise wouldn't be able to without having to temporarily unset their visibility macro etc...

Why do certain bars/buttons hide in configuration mode when I enter combat?

This happens because sometimes combat may happen when you least expect it. So that you don't have a messy UI which could make it very hard for you to respond to the threat, the Bars and buttons will obey their display rules when in combat regardless of if you are in configuration mode or not.

Why does my key combination trigger some strange action when in configuration mode?

If you have the same key binding for multiple buttons it could be triggering any of them... and most likely not the one you intend! This is because while in configuration mode all buttons are visible and so it is ambigous which key binding to use, while this is annoying (it even trips me up sometimes) it will correct itself once you exit configuration mode (or enter combat).

Why does my key combination trigger some strange action when not in configuration mode?

This will most likely be because you have used the same key binding for multiple buttons and those buttons are visible at the same time, in such a case you will need to either choose a different binding, or configure the display rules for the bars such that only one of the buttons is visible at a time (please note that even if empty buttons are hidden, the key binding will still apply... it is only when the bar itself is configured to hide that the binding wont apply).

Why can't I allocated more buttons to my bar?

Several configuration options wont work while in combat. Or alternatively you may have hit the upper limit for the number of buttons on the bar (currently 1500), or the total number of allowed buttons may be exceeded (currently 5000).

Why can't I set the scale?

Several configuration options wont work while in combat. Or alternatively the desired scale may cause the bar to exceed the size of the screen in which case the scale will be rejected.

I've setup bars for my different druid forms but when switching between them the bars dissappear briefly?!

This is because the visibility rules are treated exactly and there may be a brief swap over period where none of the conditionals are true.

To get around this issue use the [bonusbar:#] conditional in place of the form conditional. It responds to shapeshift changes etc but will keep the bar available the same length of time the default ui keeps it available. (this could also apply to other classes and conditionals where the bonusbar may be a slightly better choice)

Why doesn't my bar have a tab?

Either the bar has not been assigned a label, or its the only bar with its Top Left corner in that position... If you wish for the bar to have a tab either assign it a label and/or align its top left corner to another bars top left corner (auto docking will take care of this when dragging the bar close to another... except in the case mentioned next)

Why aren't my bars auto-docking?

This is most likely because you are in combat, it is not possible to autodock in this case unfortunately... Note also that auto docking will only take place when the top left corner of two bars get fairly close to each other.

Bonus Actions are appearing on my Bonus Bar when I change the number of rows/cols, why?

This is intentional so that changing the orientation of the bar is easy... Note that having multiple rows and columns could sometimes result in the abilities being repopulated into locations which might seem strange, this is due to the specific rules of how the bonus actions are repopulated (always remember an action wont be populated back onto the bar if it is already there, and also that button positions are always counted from left to right, top to bottom).

This is because sometimes the bonus actions assigned remain available even after the bonus bar is gone (e.g. Mind of the Beast), I believe this is the case when it is for actions you could trigger anyway (e.g. if a hunter possesses his pet, even after the possession ends all the pets actions are still available and valid).

The default (and recommended) behaviour is for the bonus bar to be hidden when not available.

This is because the action that the standard raise and lower buttons have (which is raise/lower while held down) cannot be duplicated by an addon; instead the the aim can only be raised/lowered in increments. For this first release of BF with Bonus Bar support I have decided to not create buttons to do this... (If people request it I can look to introduce it however).

Note that using mouse look to raise lower will work as normal, as will the standard raise and lower buttons.